A Night To Remember

The St. Louis Blues won 4-2 Monday night against a Bruins team that humiliated them 7-2 last Saturday. Game 4 of the Stanley Cup final illustrated again the well-documented resilience of these Blues. I have a few observations before telling you about a St. Louis team of long ago. The 2019 Blues play a bash, crash and bullying game that I’ve never particularly admired. Yup, I’m an old-fashioned peacenik who likes speed and finesse. There are, however, many things besides their aforementioned resilience I admire.
1. The Blues can score on Tuuka Rask and given the zone the Bruins goalie’s in, that’s remarkable.
2.They have Ryan O’Reilly. Who wouldn’t want this guy on their team? Talk about a competitor. Talk about a playoff player. Talk about a leader.
And....
3. They can bat the Bruins around. That’s hypocritical coming from this peacenik, but it shows how much I dislike Boston, especially that very talented snake-in-the-grass, Brad Marchand. It also reveals the dark little bloodthirsty corner of every hockey fan’s soul. I’m not proud of it. Now, let me take you back to a very different St. Louis Blues hockey team. As a matter of fact, they’re often forgotten in this story...

It was November 15, 1976. The Blues were in Montréal to play the Canadiens at the Forum. The Habs were a powerhouse (they would lose only 8 games in ’76 -‘77) in the midst of winning 4 Stanley Cups in a row. The Blues would finish 1st – 7 games under .500 - in a talentless Smythe Division. It was just another early season hockey game, but it would become a night to remember.
November 15, 1976 was election day in Quebec. Robert Bourassa’s  Liberals were facing the separatist Parti Québécois led by charismatic René Lévesque. Bourassa was at the ragged end of 6 tumultuous years in office. One of his own cabinet ministers described him as “the most hated man in Quebec.” René Lévesque was among the most loved men in the province. He was a war correspondent, radio and TV star and cabinet minister in Jean Lesage’s “équipe de tonnerre”, the Liberal government of the “The Quiet Revolution” in the early 60s. Lévesque quit the Liberals to found the Parti Québécois, and this would be his night.

A college friend of mine had tickets to the Forum that late autumn evening; the Blues against the Canadiens. Not a great draw, but exceptional seats: “Reds” at ice level. The game was playing out as expected: boringly, languorously. And then in the middle of the 1st period something extraordinary happened. The overhead clock at the Forum started to flash election results. Every time a PQ candidate was announced as a winner a great whoop went up from part of the crowd. The cheering only got louder and louder. My friend and I, two staunch federalists, got glummer and glummer. What was going on was unprecedented. The Montréal Canadiens were the embodiment of how French and English Canada got along.
Tawdry politics were never dragged into the cathedral of hockey. Habs goalie Ken Dryden, in nets for the Canadiens that night, describes the surreal scene in what is probably the best book ever written about hockey, The Game.
“No longer afraid to hope, thousands stood up and cheered and the Forum organist played the PQ anthem. And when they stood and cheered, thousands of others who had always stood and cheered with them stayed seated and did not cheer. At that moment, people who had sat together for many years in the tight community of season-ticket holders learned something about each other they had not known before. The last few minutes were very difficult. The mood in the Forum had changed.”

The game seemed to move in slow motion, enveloped by fog. It became a bit player -- ignored, actually -- in a night of high political drama. Imagine, hockey taking a backseat to anything, even politics, in Montréal. It was shocking, exhilarating and very disquieting. We were witnessing an entirely new world. My friend and I left at the end of the 2nd period; to cry in our beer and watch, stunned, the elections results on TV. Hysterical commentators in English Canada (read Toronto) warned of the end of civilization. Commentators in French Canada could feel a new wind blowing.
FINAL SCORE:
PQ: 71 seats
LIBS: 26 seats
Montréal 4 - St. Louis 2.
If the Blues win the Stanley Cup in 2019, it’ll be the first in the team’s history. St. Louis fans will declare it historic; and it will be. I’ll bet, though, very few Blues fans can recall the history their team was part of at the Forum many years ago.

5 NHLers Who Could Be Traded This Summer

The NHL playoffs are drawing to a close, with the St. Louis Blues and the Boston Bruins battling it out for Stanley Cup glory. Two teams who can call their season a success, with or without a Cup.

The other 29 NHL teams, those who made the playoffs and those who didn't, will be looking for ways to improve their rosters this summer for a chance to be next year's top two clubs. This means teams will be looking to acquire players either via free agency (both potential restricted and unrestricted free agents alike) as well as moving out some players who no longer fit with their current teams and could use a change of scenery.

And this summer is setting up to be a historic change of the NHL landscape, with potential offer sheets abound and some of the biggest names free agency has ever seen (sorry, John Tavares).

With that, The3Righties presents 5 NHLers who could be traded this summer:

5. PK Subban
The Nashville Predators were stunned by the surging… 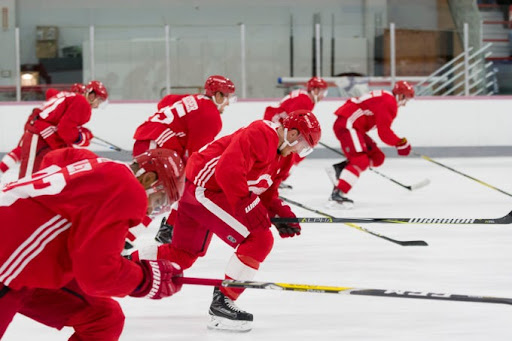 Broken Wings: Detroit's Long Road Back To The Playoffs

Mired in a six game losing skid, the wheels seem to be coming off for the Detroit Red Wings' 2018-2019 season and their dreams of competing for the Stanley Cup are coming to a screeching halt.

The  new reality in Detroit is that the Red Wings are in need of a serious fix.

The Wings haven't made the Stanley Cup playoffs for two consecutive seasons now. For a team that boasted a record streak of twenty-six straight post-season appearances, the days of Stanley Cup glory are quickly becoming a distant memory.

In Detroit, going a decade without another sniff at the Cup is a travesty. The organization desperately needs an injection of young blood to rejuivinate their depleting fan bas…